Samsung, a market leader and award-winning innovator in consumer electronics and home appliances, today announced new additions to its growing refrigerator line, including the industry’s first dual ice maker refrigerator that allows consumers to enjoy more than one and a half times the ice production of their current models. Additional new offerings for Spring 2009 include new counter-depth models.

"Samsung is dedicated to creating solutions that enable efficiency in the home, and we've designed our new refrigerators to directly address this need of our consumers,” said James Politeski, vice president of Home Appliance sales and marketing at Samsung Electronics America. "Our new refrigerators are extremely energy efficient, feature best-in-class design and include advanced technology such as our Twin Cooling system and the industry-first dual ice maker, which makes entertaining at home an easy feat." 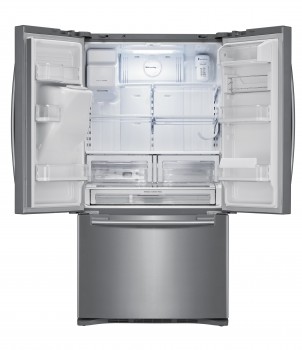 The Samsung RFG298 and RF268 French Door Refrigerators feature the industry’s first dual ice maker. An external filtered water and ice dispenser is located in the refrigerator and an additional ice maker is in the freezer. The dual, independently operated, ice makers do not take away from the interior capacity of the refrigerators and can be turned on and off. They offer the problem-solving benefit of increasing the ice making ability of the refrigerator when consumers need it, which is ideal for families and home entertaining.

The 28.5 cu. ft. RFG298 also boasts the largest storage capacity in a French Door Refrigerator with a standard footprint, offering an extra 3 cu. ft. of space over standard French Doors. This extra large interior is achieved through an advanced process that reduces the size of the interior insulation while creating more useable room. The RF268 also offers a spacious interior at 26 cu. ft., allowing consumers more storage room over standard French Doors, meaning less trips to the grocery store.

The RFG238 and RFG237 are Samsung’s new counter-depth French Door Refrigerators, which are designed to create an integrated look in any kitchen. Both counter-depth refrigerators fit flush with cabinets to create more workable space in the kitchen while still providing a large 23 cu. ft. of interior room, which is 2 cu. ft. more than typical counter depth models.

Samsung’s RF217 and RF197 are designed to fit in more compact kitchens. At just 33 inches wide, both refrigerators are still packed with features, including an automatic filtered ice maker

All of Samsung’s new refrigerators feature the company’s Twin Cooling System™, a technology that independently cools the refrigerator and the freezer to maintain the proper humidity levels in each compartment and prevent odor transfers between storage areas. In addition, they are equipped with Samsung’s EZ-Open Handle™, which allows the freezer to glide open effortlessly.

True to Samsung’s commitment to increasing energy efficiency in the home, the entire line of French Door Refrigerators complies with Energy Star® standards.

In addition, Samsung has been named by J.D. Power in the 2008 Home Appliance Study as the brand ranked highest in customer satisfaction for Side-by-Side/French Door Refrigerators. Samsung excelled in the areas of performance, ease of use, styling/feel, and operational features. This marked the fourth year in a row that Samsung has received the prestigious customer satisfaction award from J.D. Power for refrigerators.