Sharp today announced at the Architectural Digest Design Show in New York City, the roll out of its brand new SuperSteam+ Combination Steam and Convection Oven. The premium built-in unit is the only oven that can grill foods using purely Superheated steam – with temperatures reaching up to 485 degrees Fahrenheit – as its only heat source.

“The Sharp SuperSteam+ goes beyond any other combination steam and convection oven on the market. Not only can you cook with regular steam or convection heat, you can also cook with Superheated steam that’s more than twice as hot as regular steam,” said Jim Sanduski, President, Sharp Electronics Marketing Company of America. “As the worldwide leader in steam cooking, we’re excited to bring the unique SuperSteam+ Combination Steam and Convection Oven to the U.S. to help promote simply better living.” 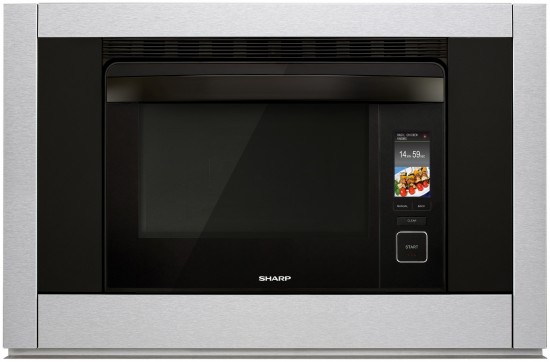 Sharp’s SuperSteam+ Combination Steam and Convection Oven can grill, roast and sauté food using steam vapor that is more than twice as hot as regular steam – called Superheated steam – which is hot enough to brown the outside of foods. Meats like chicken and salmon cook to a crispy texture on the outside with moist, tender and flavorful insides. You can also “fry” vegetables without oils using the SuperSteam+.

There are three ways to cook using Superheated steam – grilling, roasting and sautéing. To grill, the oven injects Superheated steam from the top of the oven, working to seal in flavor and crisp the exterior, while keeping food more moist, tender and flavorful than the dry heat of traditional grilling. The SuperSteam+ roast function uses a convection fan to circulate Superheated steam throughout the whole oven to evenly cook thick cuts of meat or whole chickens. Contrary to how most other combination steam and convection ovens roast, Sharp’s SuperSteam+ brings a “fall off the bone” tenderness to meat dishes because it does not rely on dry convection heat to reach roasting temperature. Similarly, sautéing with Superheated steam offers a stir-fry finish without the need for oils.

Three Ovens In One

Sharp’s SuperSteam+ is one of the most versatile combination steam and convection ovens on the market. In addition to cooking with Superheated steam, the oven’s regular steam setting gently cooks vegetables and meats, while the convection setting is ideal for baking and broiling.

Cooking with steam provides a subtle taste and helps prevent water-soluble nutrients like vitamin C and vitamin B from leaching out into vapor. Sharp’s SuperSteam+ also features a highly sealed cavity for cooking with a low oxygen level to preserve more antioxidants.

Sharp’s SuperSteam+ Combination Steam and Convection Oven can grill, roast and sauté food using steam vapor that is more than twice as hot as regular steam – called Superheated steam – which is hot enough to brown the outside of foods.

“The food we eat is the fuel that provides energy and nutrition to keep our bodies healthy and our minds fresh,” said Peter Weedfald, Senior Vice President of Sales & Marketing, Sharp Electronics Marketing Company of America. “Sharp is dedicated to making the best products to promote simply better living, which includes tools to make cooking a positive experience. That’s why the SuperSteam+ makes it easy to enjoy all the healthy benefits of cooking with steam, without sacrificing great taste or style.”

Designed To Fit Your Lifestyle

The SuperSteam+ oven’s non-stick finish allows steam to wash away stains inside the cooking cavity for minimal cleaning effort after cooking is complete.

As showcased at the Architectural Digest Design Show, the stylish and premium stainless steel design complements any dream kitchen. The oven comes built-in ready with a sleek trim kit and 120 volt power to make installation elegant and simple during a remodel or new kitchen build.

The Sharp SuperSteam+ Combination Steam and Convection Oven will be available at fine kitchen retailers nationwide beginning in April for a MSRP of $2,999.99.