A Miele Independence™ Series refrigerator is engineered to Miele’s rigorous 20 year life design – that’s 7 years longer than the average refrigerator’s current day life span. Most of its quality parts are also recyclable after its useful life is completed avoiding further stain on landfills. 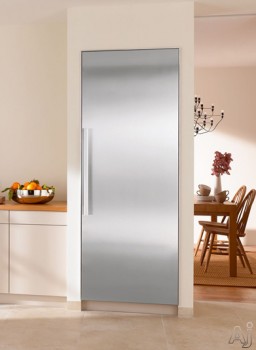 “Achieving a greener refrigerator that complied with Energy Star® was a design goal when we developed the Independence™ series,” states Matthew Kueny, Senior Product Manager for Miele. “Our proprietary technology and quality standards have helped us redefine just how much energy a refrigerator could save – far more than an average refrigerator – or even an average Energy Star® model.”

“Our proprietary technology and quality standards have helped us redefine just how much energy a refrigerator could save – far more than an average refrigerator – or even an average Energy Star® model.”How to buy an energy efficient refrigerator

How to buy an energy efficient refrigerator

“Consumers who want a greener refrigerator should first look for an Energy Star® model,” states Kueny. “Unlike other product categories, there are relatively few refrigerators that qualify for Energy Star®. Secondly, and more importantly, to make a real impact, they should not keep their old units in the basement or garage. Since refrigerators run regardless of their contents, maintaining a second unit erases any energy savings achieved with the new unit. The DOE (Department of Energy) is running a recycling program (www.recyclemyoldfridge.com) to combat this epidemic. It’s important to keep in mind that an Energy Star® refrigerator uses at least 20% less energy than one that is not qualified and uses 40% less energy than refrigerators sold in 2001,” advises Kueny.

How can consumers be greener?

“Same thing Mom used to tell you – don’t stand there with the door open,” states Kueny. “In fact, our RemoteVision™ technology will raise an alert if you do leave the door open too long. If you’re away from the refrigerator, Miele will be alerted and we’ll notify you shortly thereafter. Save more energy by activating Miele’s SuperCool™ feature while loading groceries, as the refrigerator will work quicker to get back to its optimal cooling temperature. Consumers may also try to set their refrigerator temperature slightly higher – but in the right zone for maintaining food quality/freshness. Miele’s MasterCool™ technology easily allows consumers to set the correct temperatures by zone and food type preserving food longer – which also saves energy.”